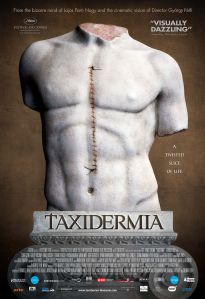 Surreal and grotesque, this black comedy spanning three generations of men serves as an absurdist journey through the history of Hungary, from World War II through the communist era to the present. In postwar Hungary, a depraved hospital orderly spawns an outrageously obese son, Kalman (Gergely Trócsányi), who in turn goes on to raise his own progeny, a skinny boy (Marc Bischoff) freakishly obsessed with taxidermy.

Mr. WaF
I have to admit it, the flames shooting from the man’s cock is what got me to watch this film.  There I said it.

What I absolutely loved about Taxidermia is it’s unforgiving nature.  It does not attempt to explain the reason behind a particular action.  Actually, you will find yourself at a complete and utter loss of direction at times.  It’s the sense of disorientation that got me.  You can not approach this film in the general sense.  Come with an open mind.

The film starts out with showing a mentally challenged individual playing with fire and ultimately shooting fire out of his cock.  And as time progresses, you begin to realize that everything you’re seeing should not be taken literal.  There are scenes of reality where you see him peeking at some school girls through the boards of a barn, finds a hole in the board, puts some lard in the hole for lubrication and then has sex with the wall.  And then there are scenes where he is having sex with the maid and all the other young girls all at once.  After he cums you see that he was actually molesting a pig carcass.  So bring an open mind.

I won’t go into the plot.  It’s too far-reaching to explain in this forum.  Understand that it is quite disturbing for those who can not appreciate art.  I enjoyed this movie thoroughly.  This is art in it’s purest form.  This is a buy for those who enjoy abstract works.