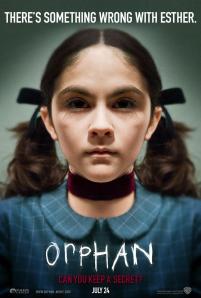 Picking up the pieces after their baby’s tragic death, the Colemans — Kate (Vera Farmiga) and John (Peter Sarsgaard) — adopt 9-year-old Esther (Isabelle Fuhrman) from an orphanage, but it doesn’t take long for Kate to see through Esther’s angelic façade. When John brushes aside Kate’s paranoid suspicions, Esther wreaks havoc on the world around her in this chilling tale from director Jaume Collet-Serra.

Mr. WaF
I know, I know; this isn’t your typical Mr. WaF movie.  I get that.  But even if it’s a big budget, big production Hollywood film, it has just enough to land it on this site.  So let’s see what we have to work with, shall we.

First, there is zero nudity and almost no profanity.  And aside from the few scenes at the end, and a couple here and there at the beginning, very little violence.  So why, Mr. WaF, do we see such a bland film on Mr. WaF.com?  I’m glad you asked.  It’s the storytelling.  Pure and simple.

This story begins with the previews.  It was brilliant.  “It’s just a little girl.  A demented little girl; but a girl none the less.”  WRONG!

She’s a grown woman with a rare hormonal disease.  She hasn’t grown, physically, past the age of nine.  And this is troublesome during the scene where her dad is slaving over a beer on the couch, sorry for his fight with his wife.  And who’s there to pick him up?  His new daughter.  She gets herself all dolled up and tries to seduce him.  He’s drunk and plays into it just enough to feel awkward and then he pushes her away.

You suspect she’s not a little girl, but not until the wife finds out the truth and in a race against the clock to get back home do we really see what’s going on.  She goes to the mirror and starts removing her makeup and then she takes out her false teeth.  He real teath are rotten.  Brilliant.

This movie made my skin crawl.  Even ranking up there with some of the best Mr. WaF films.  The writers and the director did an excellent job.  But, it’s just a rent.  Sadly, such is the nature of thrillers, you only get two views.  Once for the thrill and once for the aha’s.  So just rent it.