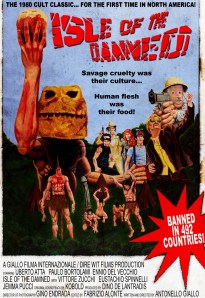 While searching a remote island for Marco Polo’s legendary treasure, Det. Jack, his adopted son, Billy, and the expedition’s sponsor, Harold, desperately try to evade a vicious tribe of flesh-eating savages hot on their tail.

This movie had a really good start.  Here’s what awaits in the first half hour:  The movie begins with our hero talking on a pay phone to his girl.  You see that this is an American movie, yet they overdubbed the dialogue with really shitty dialogue.  Their mouths moved so horribly out of sink, at times I found myself laughing out loud.  Not to mention that they chose a highly obvious black actor for the voice of a really white actor.

So, there’s a treasure to be found.  They arrive on the island and realize that they’re not alone.  There are cannibals on the island.  And apparently the family on their vacation didn’t realize that either as we find them tied up and being tortured by the cannibals.

The father is tied to a tree with some absurdly tiny twine; his daughter on the opposite.  The cannibals cut off the father’s penis and molest his daughter with it.  They then pull out his testicles through his freshly made penis hole and eat them. The mother is running through the woods.  They catch her, cut her stomach open, pull out her baby and they eat it.  Then they roll her over and have sex with her.

That’s just the first half hour.  Wanna see the rest?

Although I thoroughly enjoyed myself, I can only recommend this as a rent.  The story can’t stand on it’s own.  The absurdities are why I came.  I can’t come again.