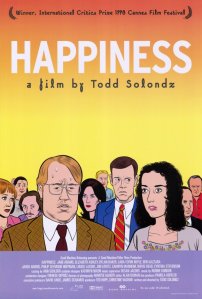 Mr. WaF
Wow, what a cast.  This movie is stacked with talent.  The only thing weird about this movie is it’s content.  It’s about sexual perversion.  And Todd Solondz does an excellent job at rubbing it in your face.

You immediately become empathetic to ALL of the characters.  And even though they are commiting heinous crimes, you’re particularly drawn to Allen and Bill’s characters.

There are two really awkward scenes in this movie.  The first scene was with Bill’s character getting his son’s friend to stay all night.  You follow Bill as he attempts to drug the boy and the length he will go to succeed.  And the second was at the end of the movie.  Bill has been found out and the police are investigating him for sex crimes against the kid.  Bill’s son sits down next to a defeated Bill and asks what’s going on, that kids are calling him a monster.  Bill, completely drained and crying, looks his son in eyes and explains every lurid detail.  He spares no emotion.  And the scene seems to just drag on as you watch this information tear his son apart.  His father, his rock, all of these horrors… can this be happening.  It’s gripping.  Completely riveting.  This kid deserved an Oscar for that performance.

This, due to the superb acting, is a buy.  You can’t get A-List actors in these types of movies.  We should support that.